Ritualizing Loss, A.K.A. Burning Things at the Beach 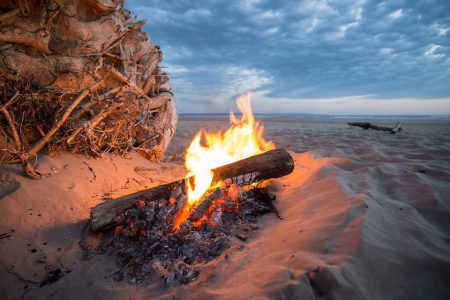 A confession: I used to watch The Vampire Diaries. It’s mildly embarrassing to admit, but it was such an addicting show. Some of my co-workers were trying to get me hooked, so they left the first season on my shelf at work. I watched six episodes in the first night.

When a teenage girl in the show becomes a vampire, she feels a lot of loss about the human life that she won’t get to live. She won’t grow up, go to college, or have kids. A group of her friends hold a wake for her to process the loss of her human self.

Around the time that I was (binge) watching this show, I also read this piece by Julie Peters called The Relationship Funeral: Rituals for a Breakup. In it, she writes: “Our culture is devoid of rituals.” She was specifically addressing the lack of ritual to process the loss of a relationship.

I agreed. I felt the general absence of space to process loss, and I was inspired, by Julie and The Vampire Dairies, to create it.

I have been a part of two late-night, burn-things-at-the-beach rituals since this time. They were both transformative experiences and have helped me become more aware of moments of loss in my life.

Why do I want to be more aware of loss?

Because I think we get stuck in fear when we don’t process loss.

I see it a lot in my work with people living with chronic pain. Developing chronic pain can be a little bit like becoming a vampire: the life that you thought you were going to live is suddenly not the life you are living. A fear of feeling the pain of that loss can make it very hard to move forward.  Acknowledging and grieving loss in the face of chronic pain can be a very important part of the healing process.

The book This Thing Called Grief: New Understandings of Loss by Thomas M. Ellis influenced my current way of thinking about loss and grief. He puts it simply: “Grief is not about stages you go through and ultimately graduate from. Rather it is a dynamic process of ups and downs, fluctuating with painful and peaceful moments, hours, days, and weeks.” He also quotes C. S. Lewis: “No one ever told me that grief felt so like fear.”

It was interesting for me to relate my sense that we get stuck in fear when we don’t process loss to Lewis’ assertion that grief feels like fear. The relationship between grief and fear is complex. I have found that carving out the space to ritualize loss is a powerful way to soften the intensity of the fear associated with it. It doesn’t take away the sadness. It doesn’t somehow tie the loss into a little package that I can put aside. But it does seem to alleviate a sense of being frozen in the depth of the loss.

A student in one of my classes once asked, “So, how do we do it? How do we ritualize loss?”

It stumped me a bit at first because my own rituals have been very, very random. I certainly don’t have a formula, just a sense that I should burn something. Upon reflection, I think a loss ritual, at least in the way that I have approached them, can be captured in two simple steps:

Of course, a precursor to this process is simply recognizing that you are experiencing loss in the first place, which is harder than it sounds – especially in the context of chronic pain.

Ritualizing loss is the legacy of The Vampire Diaries in my life. Not every experience of loss requires burning things at the beach, but for me, late-night rituals with friends and fire have been a source of laughter in the midst of grief. A reminder that when we chose to be open to feeling the pain of our loss we also become more open to feeling joy.

Get my monthly newsletter