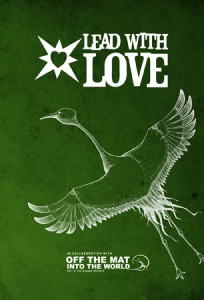 Starting in January, YYoga will be offering By Donation classes and all the money donated will be given directly to Off the Mat, Into the World’s Global SEVA Challenge.

In 2011, the Global SEVA Challenge is focused on supporting humanitarian efforts in Haiti – and all money donated will go to support this cause. You can read more about Off the Mat and the work they have done on their website.

Danielle Hoogenboom of Lead with Love, a local fundraising and community building initiative, has been the driving force behind these donation classes – as well as many other fundraising initiatives aimed at raising funds to support the work of Off the Mat.

The teachers will be donating their time for these classes, and YYoga is donating the space and the Guest Services staff, so no money will be lost to the cost of running the classes.

A donation of at least $10 is encouraged.

As a trial period, the classes are scheduled for January through March. The locations, class days and times and style are:

“Until we are challenged, we don’t know how deeply our practice has gone.”

Earlier this week, I posted this quote by Dzigar Kongtrul Rinpoche on Facebook and Twitter, and, perhaps not so coincidently, this morning I had the opportunity experience its truth in my own life.

Once a week, I teach an early morning yoga class at a law firm in Gastown, and I usually give myself at least 45 minutes for the commute.  As I was settling into bed last night, I realized that I had set my alarm for the time I normally leave – not the time to get up! Relieved that I had caught my mistake, I adjusted the alarm time on my phone and settled in for some much needed sleep.

I woke up a few times through the night, and as I woke for what would end up being the final time, I found myself feeling particularly alert and rested.   Strange, I thought – given how early my alarm was supposed to go, I should check my watch.

You guessed it – it was 10 minutes before I was supposed to start teaching!  I had failed to re-set my alarm.

I jumped out of bed, and as I hurried around getting dressed, brushing my teeth, and gathering everything I take with me to teach, I was making phone calls and sending texts trying to get in touch with someone from the firm.  I hadn’t made contact with anyone by the time I was ready to run out the door, so I just decided to head out in case they still wanted to do a later class.

Less than a minute into my journey, one of the people from the firm called to say that they were happy to do a slightly later class.

Relieved that a later class worked, I settled into my commute to Gastown, and in that settling, I noticed the shift in how I had responded.

In the past, if I had made a mistake like not setting my alarm, my mind would have taken off – questioning how I could have been so stupid, how could I have dropped this ball? And, without an answer, I would have kept the questioning thoughts coming until I felt about as small as the ball I had actually dropped.

This morning, however, something was different. There was more ease, more acceptance. I still rushed around getting ready to run out the door, I was still very apologetic to everyone at the firm, but I offered myself the same understanding I would have afforded others in the same situation.

I even laughed thinking to myself that the universe – in all its wisdom – must have been conspiring for me to get some more much-needed sleep!

What is perhaps most important to note about my experience is that I’ve only come to recognize my pattern of persistent self-scolding through its fading away. In the past, I couldn’t see how hard I was on myself because I had never known any easier way.

Earlier this fall, I taught a series of classes on “The Metaphor of the Nose,” which is a title I used to refer to the fact that the nose is constantly obstructing our peripheral vision, but we are so accustomed to it that we actually have to work to see it.

I offer that it is very much the same with our habits and patterns that obstruct ease and joy in our lives. They are not easy to see, because, in most cases, they have been there for as long as we can remember. And, as we work so hard to find happiness in our lives, it seems almost counter-intuitive to think that we would be doing things that keep us from what we are seeking. But, I am putting forward – to myself as much as others – that maybe we are actually the only people that can obstruct the joy and ease that we seek, because ultimately, it is not a matter of seeking – but, rather, a matter of seeing.

Earlier this week, I attended a Yin Yoga class with Chris Brandt. While Chris introduced the theme for his class as an exploration of the impact waking up with a good song in your head can have on your day (simply put: the value of simple pleasures), I experienced the class (as my second title suggests) as a comedy night. Chris was on comedic fire, and there were a few points where I was a bit worried that I was going to start laughing uncontrollably in class – like I used to at school in my pre-teen years.

Being on the brink of uncontrollable laughter really takes me back to memories of grade six: in the French teacher’s office after school with my friend, laughing so hard I could barely stand up straight, and trying to convince the teacher that I had no idea what the words I had written on the board before French class meant in French. Merde, that was funny.

But, side notes aside, since Chris’ class I have been reflecting on a comment he made about the sense of seriousness that can pervade a yogic, or spiritual, practice, but how, in contrast, one of the greatest spiritual teachers of our time – the Dalai Lama – is always giggling.

Reflecting on my teacher Yogi Vishvketu in India, he too seems to move through the world with laughter. I remember him laughing so much of the time – and sometimes for seemingly no reason at all. He has an almost ever-present twinkle in his eye, and I’ve come away from teachings with him with quotes like, “Life is for fun,” scribbled in my notebook.

What I have been wrestling with is the gap between the joy spiritual teachers so often embody and the laughter I find in Chris’ subtle warnings about the side-effects of wind releasing pose. Because, as much as laughter was exactly what I needed that night, I don’t believe that leaving my yoga practice behind and going to Yuk-Yuk’s Comedy Club five nights a week is going to bring forth the joy I see in teachers like the Dalai Lama and Yogi Vishvketu.

Though I haven’t yet found my way from the laughter of Yuk-Yuk’s to the giggles of the Dalai Lama, my instincts tell me that it is a dedicated practice that closes the gap. I am trained in a classical form of yoga, Raja Yoga (Royal Yoga, or Classical Ashtanga Yoga), and in this form of yoga, we work with the eight-limbed path outlined by Patanjali in the Yoga Sutras. The second limb of this path, the niyamas (often translated as observances), outlines actions and attitudes to cultivate to reduce suffering; the third of these five observances is Tapas, which is traditionally translated as “fiery discipline.”

In an article in Yoga Journal, however, renowned yoga teacher Judith Hanson Lasater reflects on how the translation of Tapas to discipline can lead to an inappropriate association with being difficult or forced – which is, perhaps, where the seriousness that Chris was reflecting upon in class stems from. Lasater offers an alternate translation of tapas as “consistency in striving toward your goals: getting on the yoga mat every day, sitting on the meditation cushion every day—or forgiving your mate or your child for the 10,000th time.”

Being familiar with the depth of Chris’ personal practice and with his approach to teaching yoga, I interpret his offer of humour as a means of guiding students away from a “No pain, No gain” approach to their spiritual journey and guiding them towards a sense of tapas more in line with Lasater’s translation. The beauty I see in this approach – in laughing out loud while holding saddle – is the way it draws forth a sense of connection between laughter and a dedicated practice and reminds us that we practice yoga to find joy, to be happy and to giggle like the Dalai Lama.

Get my monthly newsletter